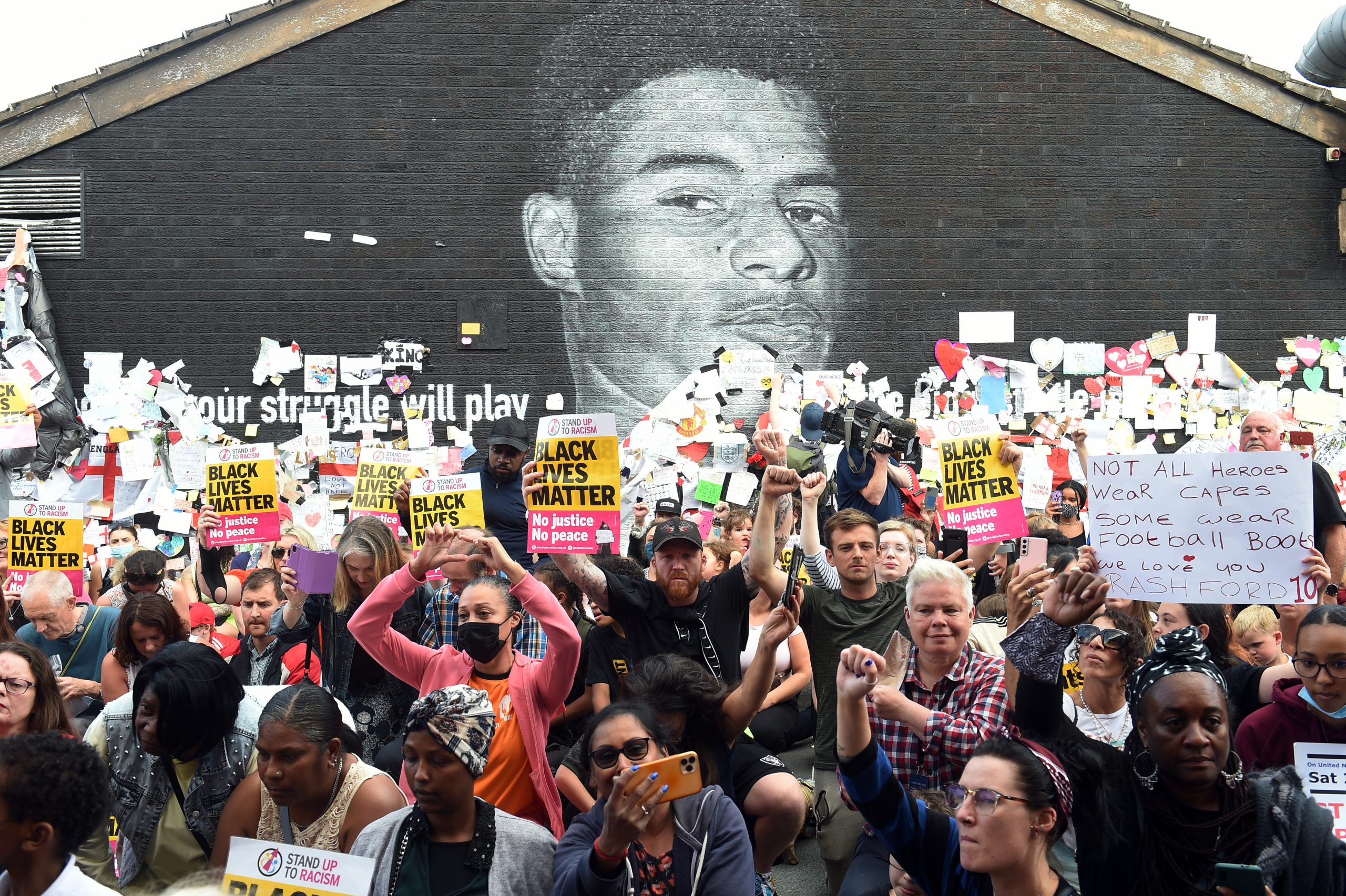 Stand Up to Racism Demonstration at the Marcus Rashford mural after it was defaced following England’s Euro 2020 final defeat against Italy. (Reuters/Peter Powell)

ENGLAND is “systemically racist” and the UK government is in breach of a United Nations (UN) treaty designed to eradicate racial discrimination, a recent report claimed on Wednesday (14), adding that minority ethnic groups in the country face sustained disparities across health, the criminal justice system, education, employment, immigration and politics.

As per a recent research by race equality think tank Runnymede, some institutional practices and customs continue to harm ethnic groups in the UK and the UK government’s recent policies are making the matter worse.

Suggesting that racial inequality has worsened in some areas of England since the last shadow report was published in 2016, the report says that it is “particularly alarmed” over the government’s “Electoral Integrity Bill, the Police, Crime, Sentencing and Courts Bill and the new plan for immigration”.

Based on the evidence from more than 100 civil society groups, the report’s findings say that the government’s immigration measures “stand in clear breach” of UN International Convention on the Elimination of All Forms of Racial Discrimination (ICERD) while the new Immigration Bill might pose a “significant threat” to ethnic minorities’ rights.

Accusing that the government has not acted on several recommendations made by the ICERD in 2016, such as to provide protection to victims of dual or multiple discrimination and to make caste an aspect of race under law, the report also found that the government is in breach of numerous other articles of the UN ICERD.

The report came as the country witnessed a torrent of racial abuse that was targeted at England’s Black footballer Marcus Rashford, Jadon Sancho and Bukayo Saka after its defeat in EURO 2020 on Sunday (11).

Runnymede’s report also directly questions the findings from the UK’s Commission on Race and Ethnic Disparities (CRED) earlier this year, which concluded that the system is no longer “deliberately rigged” against ethnic minorities in Britain.

Arguing that CRED’s conclusion “misrepresents the scale and complexity of the issues”, the report stated that it starkly contrasts with the evidence received for the current report which suggest that racial inequality has worsened in past years in some areas.

Calling for the Tories to ensure UK’s laws and policies fully comply with the ICERD’s definition of discrimination, the report urges to urgently implement a strategy to advance race equality.

Other recommendations in the report include engaging with social media platforms to tackle the incitement of racial hatred online, and ensuring effective systems for reporting hate crime and recording data.

Runnymede Trust chief executive, Dr Halima Begum, who in 2019 called prime minister Boris Johnson an “entitled Bullingdon Club brat”, said that progress has been made- like the roll-out of the Covid-19 vaccine to ethnic minority groups and efforts to address the Windrush scandal- though “race has become a needlessly fractious issue in the national discourse, and many members of our black and minority ethnic communities continue to experience stark disproportionate outcomes in their life chances”.