A group of Fijian-born soldiers who sued the British Government after being classified as illegal immigrants have been granted leave to remain in the UK.

This comes despite their losing a legal battle against the government. 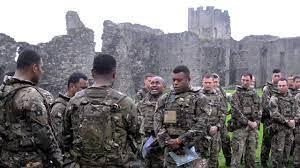 Fijian soldiers in the British Army Photo: courtesy of forces.com

The Guardian reports that seven of the group have been granted indefinite leave to remain, and a final applicant is expected to receive the status soon.

Their lawyers claimed they were the victims of systemic administrative mistakes because they weren’t properly advised on their right to stay legally in the UK after completing their military service.

Campaigners have been pushing for changes immigration regulations so soldiers recruited from Commonwealth countries who have served four years in the military are entitled to apply, free of charge, to remain in the UK when they leave the army.

One of the claimants, Taitusi Ratacaucau, was told last year that he needed to pay more than US$55,588 to cover hospital bills after an emergency operation to remove a brain tumour.

Hospital staff classified him as an overseas patient and therefore ineligible for free NHS care, despite his 10 years in the British army from 2001, and despite the fact that he had been living in the UK with his wife and three daughters, paying tax and national insurance since his discharge from the military in 2011.

Others faced homelessness, lost employment and feared deportation due to their status as illegal immigrants.

Ministry of Defence rules state Commonwealth-born service personnel are eligible for indefinite leave to remain in the UK after discharge if they have served for four years.

But the veterans said the army failed to inform them that they needed to make an immediate application for leave to remain in the UK, despite a clear requirement that the process is explained to all non-British veterans before they leave the army.