The public is “fed up” and “demoralised” by the number of migrants attempting to cross the English Channel, Priti Patel has claimed.

The home secretary‘s comments came hours after it was confirmed a toddler whose body was found washed up on the Norwegian coast was that of a boy who died with his family while trying to reach the UK from France last year.

Ms Patel told MPs in the Commons that people seeking to claim asylum must do so in the “first safe country” rather than try to reach the UK.

She added that her French counterparts “absolutely must do more” to respond to migrant numbers and reduce the chances of people attempting to cross the Channel. 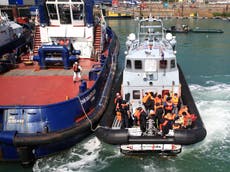 There were reports on Monday that migrant children wrapped in lifejackets had arrived in Dover after crossing the English Channel.

Kent County Council has threatened Ms Patel with legal action, saying its services for unaccompanied child migrants are at breaking point for the second time in less than a year.

The authority said it may no longer be able to accept new unaccompanied asylum-seeking children (UASC) within days – a situation which came to pass in August 2020.

A Home Office spokesperson said: “We recognise the longstanding role that Kent County Council has played in supporting unaccompanied asylum-seeking children and are extremely grateful for their contribution.

“We continue to encourage more areas to join the National Transfer Scheme and do their part.”

Charities have called on the Home Office to increase funding for children who arrive in the UK “completely alone and incredibly vulnerable”.

“They have arrived in the UK after making a dangerous journey that would terrify most adults.

“The government has a duty of care but once again it appears that legal action is the only way to make the home secretary to recognise this.”

Artin, his two siblings and their parents, Rasoul ran-Nejad and wife Shiva Mohammad Panahi, died when their boat capsized on 27 October.

Artin was reported missing following the tragedy and it was not until Monday that police confirmed that a body found on the Norwegian coast was that of the young boy.

His body is set to be returned to his family in his home country of Iran, Norwegian police said

Artin’s family had sold their house before leaving Iran and paid £14,000 to get on to the boat, with a further £8,200 supposed to be due when they arrived safely in the UK.

Ms Patel said at the time that the deaths were “an ultimate tragedy” and one that “could have been avoided”.

Meanwhile, MPs on Monday also heard the home secretary’s decision on whether she would appeal against the High Court ruling on Napier Barracks was “imminent”.

Six asylum seekers previously housed in the former Army barracks in Kent won a legal challenge against the government last week after a judge ruled their accommodation was inadequate.

Home Office permanent secretary Matthew Rycroft said the department was studying the judgment “carefully” and “will work out what it means for our ongoing use of the barracks”.